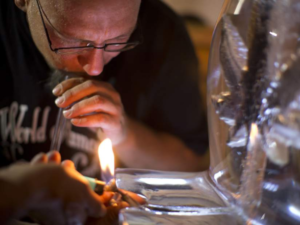 A group of cannabis supporters wants to make it legal for consumers to smoke marijuana at a lounge, at a one-time event or taste test at a cannabis farm tour, the same way craft beer is consumed.

The concept first must be approved by state lawmakers, who took the first step Thursday with a hearing on Senate Bill 639 in Salem.

A similar measure has been introduced in the House. Social consumption measures have failed in the past, but one of these stands an equal chance of passing, said Sam Chapman, legislative director at New Revenue Coalition, a Portland lobbyist.

Samantha Montanaro, co-founder of Tokativity, a women-centric membership-based organization in Portland and Bend, testified before the committee that providing a public space to consume cannabis outside the home is needed.

“It was shortsighted to legalize cannabis without a place for people to get together and smoke it,” Montanaro said. “Legalized cafes create a space that we can put guidelines on. We’re asking for the same provisions that are included with cigar lounges or hookah bars. It’s not going to become Amsterdam, but I want a place where I can go with my girlfriends, like a bar.”

To read more about the possibility of indoor consumption spaces, head over to The Bulletin’s website.