Even where it’s legal, buying marijuana can feel like an illicit activity. In many cases, you exit with a sealed bag containing your purchase. Establishments warn you not to open your package until you’re home, since it’s still not legal to indulge in public. And if you’re a renter rather than a homeowner, even partaking at home may be impossible, since landlords can bar tenants from consuming marijuana.

So what’s a cannabis user to do? At the moment, not much. 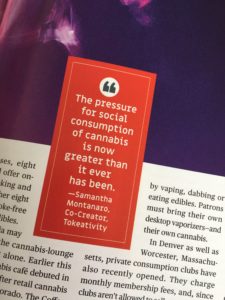 “We’re moving in baby steps, but at least we’re moving,” says Samantha Montanaro, a Portland, Oregon-based cannabis advocate whose organization, Tokeativity, hosts cannabis-centered events around the country. “For so long, we were led to believe that cannabis was the devil’s lettuce. We were told it should be lumped in with these evil drugs that people get addicted to. Condoning smoking weed is a hard thing to convince legislators to do. In most instances, they haven’t gotten there yet.”

Still, Montanaro and other experts agree that as more states legalize medical and recreational marijuana the future of cannabis consumption will undergo dramatic changes. In particular, instead of being confined to their homes, users in some legal states will be able to head to cafés, lounges or tasting rooms.