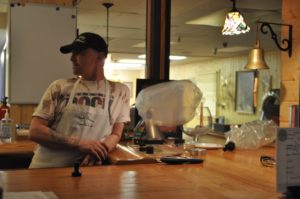 The question of where to consume cannabis raises other knotty issues as well. Renters can’t legally smoke without a landlord’s permission, for example, and those who receive federal subsidies, known as Section 8, are barred altogether due to federal prohibition of cannabis. There is the question, too, of where to send those who buy cannabis and are staying at hotels, which also usually ban cannabis smoking.

Samantha Montanaro, the co-founder of Portland-based Tokeativity, an organization that seeks to empower women around cannabis-related issues, has engaged its members on the consumption space debate.

Even though Oregon has a liberal view on cannabis, Montanaro told Cannabis Wire,the smoking ban illustrates the fear and stigma that persists, something that cannabis lounges would work against. Montanaro sees something of a nanny state at play in the issue, regardless of competing opinions on the dangers of indoor use, which she doesn’t believe rise to the level of  chemical-laden cigarette smoke.

To read the entire article, head over to Cannabis Wire’s website.